You are here: Home / Real Food / Tuesday slides on by

There wasn’t much mischief today from tuesday. And here at 10pm I’m staring at Wednesday, then Thursday, then a work day for Friday. I need a work day at school. I got so behind on papers and filing while I was out sick. Now I feel like I’m treading water and that’s not helping the daily headaches. And my hip is aching and I know that will subside once I start back the strength training. But right now, I feel like an old lady.

Speaking of old, I’m a huge Biggest Loser fan. Yeah, I’m sure they undergo some crazy nutrition and exercise rules to lose the massive weight. I’m sure there are injuries we do not hear about (even rhabdo ;-). I’m aware that it’s unrealistic to live that way in the real world. But I love the main point. People are overweight. They’re health is in the depths of purgatory. 99% of the time, their problems are PREVENTABLE by putting down the fork and going for a walk.

This season is really making me think. They divided the contestants into 3 teams by age. The first thing I noticed is the oldest group (55+) were the smallest of the contestants. I guess it’s hard to find a 300 lb 60 year old who is still alive and meets the bare minimum requirements to just show up on the first day. That first episode just really made me think. And I started really looking at crowds of people. I saw the same thing. Tons of kids, 20’s-50’s morbidly obese. Not many gray haired people over 250. People die from being fat. They just do. Sure, it’s divided into things like diabetes, heart disease, etc. Those are preventable in most cases. I’m not talking about Type 1 childhood diabetes. Or those pre-disposed for heart disease.

The second thing I noticed tonight is that they work just as hard as the younger groups, but two things prevented them from achieving the same calorie deficit.

It is sad to think that the older I get, the harder it will be to lose weight. That’s just the wake up call to keep my weight under control now in my 30’s. I can see how hard it will be when I’m applying for social security benefits. The good news is that those two things CAN be overcome. In tonight’s show, the older team beat the middle team in percentage of weight loss. They lost a total of 22lbs but that was a higher percentage since they started out at a smaller weight as a team. Again, no 300 lb person in the whole group. I was glad to see them win. It’s just really making me think and feel anxious especially since I’m not able to work out right now. I feel like each day is an opportunity and I’m wasting those chances. However, if I don’t follow my doctor’s orders, I could set myself back more days and weeks.

For dinner, I wanted veggies. And pasta. So I had both.

1. Cook bacon until done. Remove and chop for later.

2. Drain most of bacon grease until a thin layer is coating pan.

3. Saute’ brussels and mushrooms for about 10 minutes on med-low heat.

4. In the last minute, add back the chopped bacon and parmesan.

5. Serve with pasta and veggies, if desired. 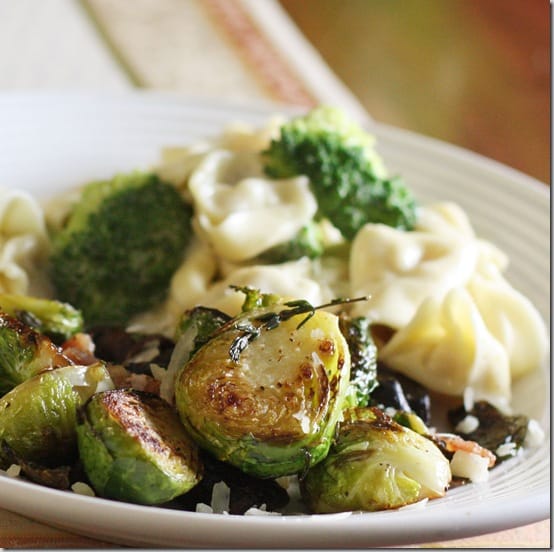 3 more days until I can run. I’m counting the hours.