You are here: Home / Real Food / Surfin and Turfin’ on a Friday night

I never thought I would use those two words together because I always thought it meant steak and lobster. I don’t get the whole lobster thing, but one day, I’ll brave it. Dismembering a crustacean on the same plate as my steak is just kinda hard to wrap my head around. It seems…..I don’t know…..creepy. I used to watch the lobster tank at my local Kroger with my grandmother. I knew they were taken out of there and sent home with loving parents, but I thought they were PETS. Imagine my surprise at the ripe old age of 8 or 9 when I discovered people ate those things. Just like clowns, I never got over that one. Come to think of it, television was how I found out about creepy clowns…..and lobsters at main courses. I should have read more.

Anyway, tonight’s dinner was simple-grilled steak and vegetables with baked potato. When I was digging for the sour cream, I saw leftover shrimp and threw them to Stephen to throw on the grill.  Instant surf and turf my way…tastes great, less Lobster. 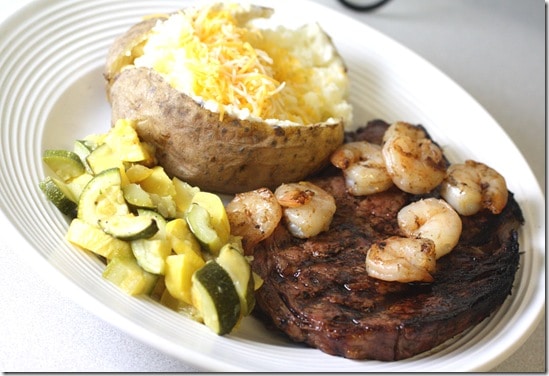 Things are heating up at school—literally. It’s been a ROUGH week, but hopefully there will be calmer waters ahead. Stress at work leads to either not eating or not eating well. Maybe one day, I’ll find that balance.