A couple of years ago, when I heard that Alabama would be playing Colorado State this year, I started furiously searching the car, couch, Frankie’s bathroom for pennies. I was going to be on a plane to Colorado for that game.

Instead, I’m sitting at home, stretched out on the couch. The game is in Tuscaloosa. Both years. I’m a little peeved about that. I thought one game is here, one game away, right? The whole tit-for-tat thing. I was wrong. And I kind of want to Google “tit-for-tat” but I’m a little afraid this might show up. I sincerely hope that is body paint and not a real tattoo. 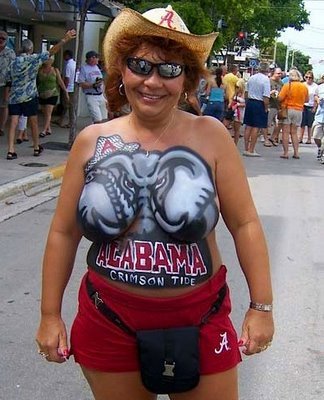 Anyway, the game is over. Very little fanfare because it didn’t really get that good until the last few minutes when we finally put enough points between us to make it look like the #1 team played an unranked team. But for 90% of the game, it was not a devastating blowout and it really should have been. The way we played last week against Texas A&M seemed to relieve a lot of worries in Alabama. After tonight, now I’m worried about all the upcoming games. This is going to be a year of TUMS and stress eating.

Why am I so fired up about this?

All this means that I want to win every week. If we lose 1 game, I think we have used up all our “plus one” passes. The humans in the BCS judging game are not going to give us another chance if we have a loss. I firmly believe that. Nobody wants to see a Bama 3-peat except bama fans. . . true bama fans.

So, 3 games down, 7 more to go in regular season. Roll Tide. Get it together before Ole Miss drives on in next week.

Interesting a part of content material. I just found your web site as well as in accession investment capital to assert we enter reality cherished consideration a person's blog site articles. However I will be signing up ones bottles or simply My spouse and i satisfaction you get the ways to access continually quickly.

I don't really follow college football, but I understand about the games. My Giants (yea, I know let the ridicule begin) have been doing terribly. And they weren't even in Albany for training camp this summer so I wasn't able to see them at all! I hope your team wins!