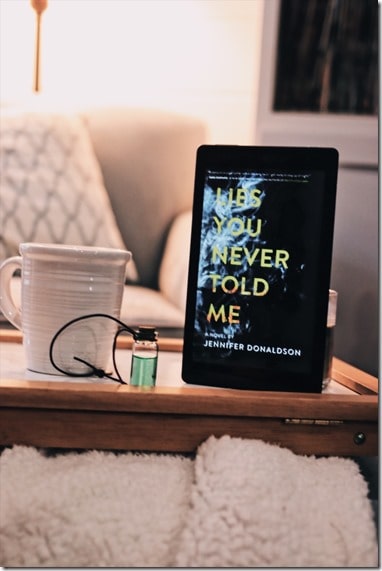 I’ll start by saying I didn’t realize this was technically a Young Adult thriller until a few chapters in. Yes,  I knew the characters were in high school, but I once steered clear of YA thrillers. Many of them are not very well-written and lack real character depth.

Jennifer Donaldson BLEW ME AWAY with her debut novel. The fact its her first published work is a tremendous feat given the success of this story.

Quick version: This story is told in dual POV alternating between Gabe and Elyse.

Gabe is a typical high school student with a hot girlfriend Sasha. I would like to take Sasha out back and beat the crap out of her. I did not like her and had such a visceral reaction to her plots and schemes. I filled up my swear cauldron with this character, alone.

Then we have Elyse who is a very shy student who is hiding a secret at home—her drug-addicted mother. Elyse is also the lead in the school production of Romeo and Juliet.

The story is a mix of a whirlwind of bad decisions by both Gabe and Elyse and the supporting characters. Most of the book, I felt like I was reading 2 different stories and I was fully engaged in both of them. I was cheering for them both while also following the psychological drama from them both. I wanted Elyse to stop her downward spiral and I wanted Gabe to just get away from Sasha for the love of all that’s good and holy. I wanted to tell the drama teacher to stay in his lane while wishing the mother would just be a mother to a child who needs some guidance for what she’s dealing with.

But then the ending knocked me off the bed at 2am and questions are answered. Lies are revealed. And more questions arise. That, my friends, is what makes a book great. This wasn’t a neatly wrapped up story with rainbows and butterflies at the end. This ending was a grueling battle and I didn’t want it to be over.

Thank you to Penguin Random House for the ARC. This book is on sale May 29th.

I'm sorely disappointed and do NOT get any of the ending.......please email me and explain