…..because we want to get a brief glimpse of hell.

Let me say up front that field trips stress me out like very few things do. The gazillion things that COULD go wrong, either have or will happen while I am on a field trip. Forgot the check to give to the Barnyard? Yep. Kids throw up? Yes. Medical emergencies? Of course. Bathroom accidents? double yes. Family drama?

Oh let me just tell you about THAT one. In my class, I had the child with the Wandering Eye Dad (not physically…that’s a nice way of saying he was an a-hole who was carrying on this illicit affair with another woman and texting with this other woman during his every-other-day trips to the school to “have lunch” with his son). The Other Woman had a kid in the pre-K class. On the day of the KINDERGARTEN (not Pre-k) trip, the Other Woman decided she needed to go to help chaperone because we looked like we needed more people. We had almost as many parents as kids but whatever. She decides to ride with the man she’s cheating with and HIS WIFE. I spent most of the field trip keeping his son away from hallways and dark corners because he was sneaking off with his other lady and leaving HIS WIFE to hang out with her son. I had a migraine by the time we got back. I swore I would always be sick on field trip days. It wasn’t far from the truth.

Anyway, today promised to be less stressful since I didn’t have any parents going, so no family drama.

Our first stop on the “around the town” trip? The donut factory to see big machinery that fries hot stuff and is coated with gluten-containing flour. I knew we were in trouble when the first words out of the nice lady’s mouth was “Don’t let them touch the machinery because it’s hot to 500* and could cause permanent damage”.

Well, that went well. Then the nice lady asked if anybody wanted to push the button on the squirty thing that spits out raspberry filling. Before she could call a name, one little guy pushed the button (with no donut on it) and raspberry filling went all over the girl and the floor. They quickly shooed us out of the factory area and distracted them by giving them a hot glazed donut…at 9:00 am.

After we left with the building still standing, we drove to my favorite place in Alabama. Bryant Denny Stadium. We played “red-light, green-light”, “duck-duck-goose”, “lets whine about how hot it is”, “lets crawl over all the coach statues and do obscene things with them”, and “dog pile until someone cries or throws up”. All that took about 3 minutes and then we were left with hideous whining and stomping feet until we promised all sorts of things to calm the masses..like booze. It’s a good thing all the kids were too busy playing to notice the commotion. FINALLY, it was lunch time and we sat in a big shady block of concrete hoping to get a glimpse of Nick Saban. He must have been busy or out of the office.

Then it was time to see the locker room, tunnel, and stadium. The first thing we saw…a giant special rug that NOBODY could touch. The gave us that warning as we were trying to corral 80 kids in this smallish area. Try telling 80 kids they can’t touch something that is huge and bright. It was chaos. Here is the rug in question. 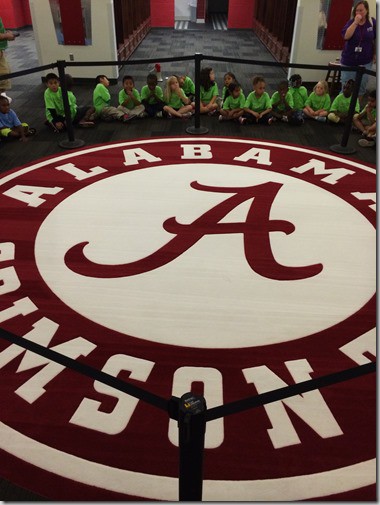 Only the players can touch this and ONLY when the team wins. Which means, the team has touched  this rug 36 times in the past 4 years. I think that’s pretty amazing. 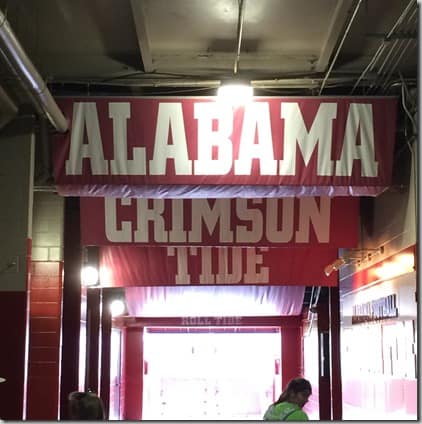 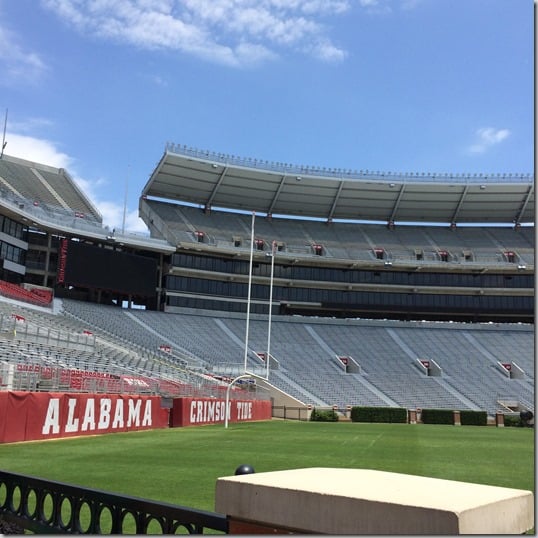 I think the adults enjoyed this as much as the kids.

Oh..and I might have taken a pic of a pic of my favorite player ever. 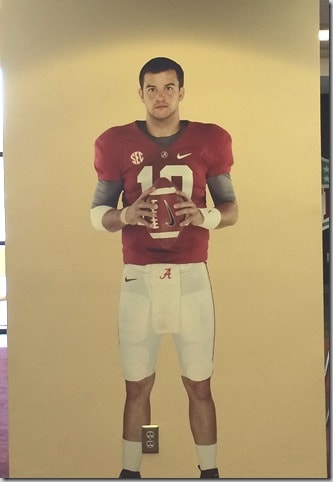 The trip was over and all that was left was the bus ride home. My favorite part of field trips? The scene on the bus 8 minutes after pulling out of whatever parking lot we leave. Most kids are passed out! It’s quiet and nobody got left or maimed and this didn’t happen. 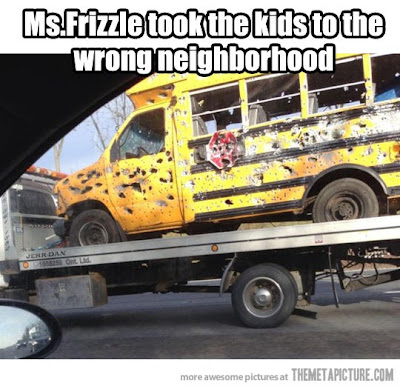 Final field trip of the year…DONE!