I’ve been waiting for this day. I love the Olympics, and after watching a few trials in track, gymnastics, and swimming, I’ve tried to be patient. Other than Football in the South, these Games have been on my calendar. So, what is on my top 10 list?

Beijing was UNREAL. I’m not one to gush over China, but they knew how to throw a party. Remember the guy running around the top of Olympic Stadium to light the torch? 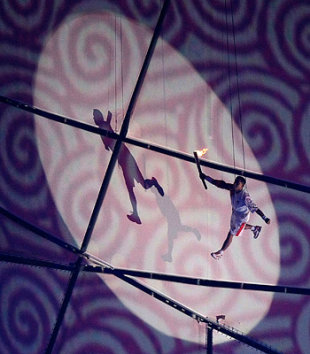 The Chinese team is supposed to be the favorites, but team USA looked great in the trials. Jonathan Horton is looking stronger than ever. The team lost to Japan in 2011 World Cup Final…and paybacks are rough. I just love her. She’s so down to earth and one of my track heroes. She got silver in Beijing and I want her to get the gold in the 200. This girl has qualified for a ton of events. I want to see her win them all. Phelps did it, she can, too.

These ladies are back!  After their perfect records in Beijing, they were going to take some time off to devote to family. As one recovered from injury and one recovered from childbirth, they both trained with another partner. Misty quit playing because her heart wasn’t in it anymore. When Kerri was ready to return, she trained with another partner, but that didn’t last long. Misty had a huge change of heart and called up Kerri. The rest is history. They are back and are still huge favorites.

Who can forget this? This is one of those “Mary Lou Retton” moments. Those Olympic seconds where I know where I was and vividly remember the time CRAWLING by. I’ve watched the youtube video no less than 100 times. He got his 8 Olympic medals and I hope he gets a few more. But it’s also time for someone else to get his time on the podium…..

After Beijing, he wanted to get stronger. So he does what any guy does…flip tires before breakfast.

So yes, bring on the gold, Lochte.

I’ve always loved the girls in buns flipping over bars. And I’m pretty sure I’m not the only one who wanted to be a gymnast and may have sprained an arm or two trying to do crazy flips.

1. What am I looking forward to the most?

Watching the flag rise and hearing the National Anthem. It never gets old.