On a cold Halloween night, all I wanted was soup. The door has been opening every few minutes to trick or treaters and random high school kids with trash bags hoping to score. I told them until I saw some effort in a costume, I’m keeping the candy. One came back with his shoes off, pants rolled up, dirt on his face, broomstick over his shoulder…and it may have been my broom. He said he was a “train bum”. I called that close enough and gave him the goods. I love Halloween. I’m a teacher. I bribe. And I can get kids to do more than they really want to or knew they could.

It was a ROUGH day at school and not because of the kids. Yes they were excited but we knew that when we woke up this morning. Halloween is a time of fun for most kids and they love dressing up. What was rough was the crazy new requirements for records and assessments for the teachers. It was one more brick trying to keep me under water. When I got home, I was tempted to shut off my light and be a bah-hum-Hallo-grinch. But some early treaters knocked on my door at 5:45…just as I walked in from school and I didn’t have the heart to ignore them. I passed out some tootsie rolls and turned my porch light on. The highlight of the evening was Stephen cleaning fish on the table. He had the electric knife which is very loud. I opened the door and he really fired that thing up and let out a creepy scary dead man dying a painful death scream. When I looked down, it was a tiny little girl in an ADORABLE snow white costume. Her dad was standing in the yard trying not to roll off the lawn from laughing so hard. The little girl peeked around the door and saw him with the evil electric knife and said “is that fish I smell?”.  The dad lost it. So did I.

Dinner was leftover soup and these. 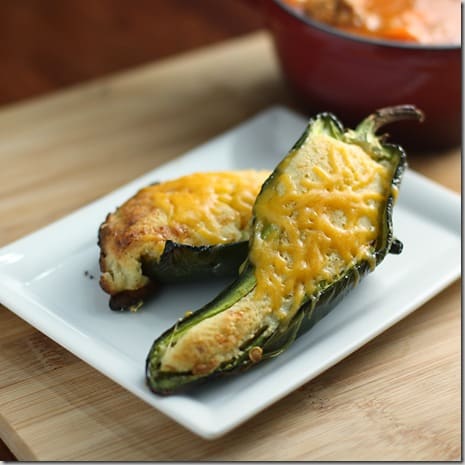 2. Add other ingredients and mix. Save the other half of cheese.

3. Cut poblano peppers lengthwise. Keep the stems to hold in the cornbread mix.

4. Scoop the cornbread mix into the peppers, leaving a little room to rise.