The Cutting Edge movie was released…20 years ago??? Kate “Toe pic!” Mosley and the growly snarling Doug “you want my hands WHERE?” Dorsey graced the ice and our hearts 20 years ago. Nothing has made me feel my age like that little bit of information that came from Stephen’s Fountain of Useless Knowledge. The Cutting Edge was the Ice Capades of my generation. I’ve seen it so many times, it’s approaching the quote-entire-movie-line-by-irritating-line status. 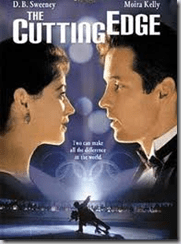 Did you know that not getting enough sleep can make us fat? Yeah, I’m pretty convinced that everything in one form or extreme can make us fat. I’ll work on getting those extra zzzzz’s. I expect to lose the equivalent of a small donkey by the weekend. 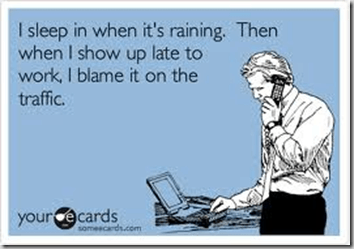 Hello sweat. I used to see you only when I worked out, not when I walked to check the mail. I am hoping this “unseasonably warm” week of weather is not the first stretch into the summer inferno we live with down here. On one hand, our spring break week is usually cold and rainy, so the beach people are loving this. On the other hand, I just don’t like weather misery starting in mid-March. I need to ease into the humid funk that is Alabama summer.

Now that social hour is over and I’m done rambling about stuff nobody really cares about (Really??? 20 years???), I’ve eaten some good stuff today.

I really hate that Target now carries this. And I hate that it costs about as much as a gallon of gas in Alaska. But it’s really good. It has a ton of flavor for a chicken soup. 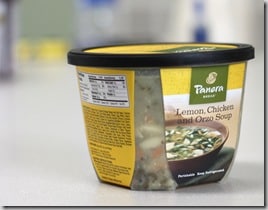 It didn’t have enough veggies for me. I’m trying to eat more greens and after I made this plate, I realized I still didn’t have a lot of green food.  If I wasn’t so hungry, I had some kale hanging around but I was HUNGRY. I had 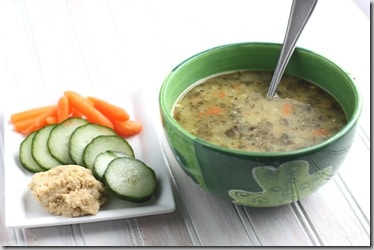 They also have a Starbucks in our Target. When the barista asked for my name, he did a double-take. He said “like the hurricane?”. I kinda froze because it’s been a while since anybody asked me that. Anyway, he made my skinny cinnamon dolce no whip just right. 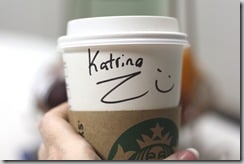 The rest of the afternoon, I drank a boatload of water trying to reach my water goal for today. I whipped out my Christmas present. Teavana tea. This is some good white tea mixed with herbal tea. The flavors are Youthberry white and Wild Orange Blossom herbal. They had these two blended together at the sample table and they were so good, I bought some for my grandmother and mother-in-law. I then went back later and bought some for myself. It’s a little pricey and I had a case of sticker shock. I’ve never drank a lot of hot tea, but the research on the medical history of countries that cultivate and include daily tea is too convincing to ignore. And the latest research on white tea offers some convincing conclusions that it’s more potent than green. That bag of tea is $7.00. That tea ball is 1.5 Tablespoons before it was steeped and bloomed.  It is definitely a treat so I need to ration out the good stuff and buy some good-but-cheaper green and white from the grocery store. 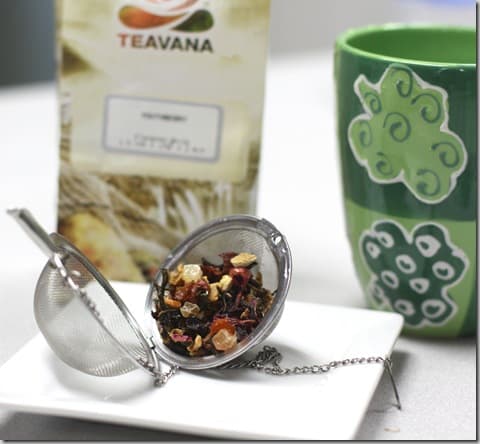 Dinner tonight included a grill. It was so good I didn’t get a picture. Steak, veggies, and sautéed mushrooms. That never gets old. We buy the steaks in bulk when they go on sale every 6-8 weeks. By “on sale”, I don’t mean the dinky 1-2$ off. I mean the big sale which means a pack of two steaks that is usually $20-$23 is now $8- $11. They hate to see us coming in the door that week.  After spending our first 5 years pinching every penny and considering a date night to Taco Bell as a splurge, we started eating out more after moving here. It didn’t take us long to figure out that we both loved a good steak dinner but it would put a sizeable dent in the eating out budget.  After we got the grill, I bought 2 steaks to try out instead of paying to go to Outback or Manascos. That was 3 years ago and we haven’t been to Outback since.

Time to finish watching Kate and Doug insult each other and then fall in love suddenly and win the medal.