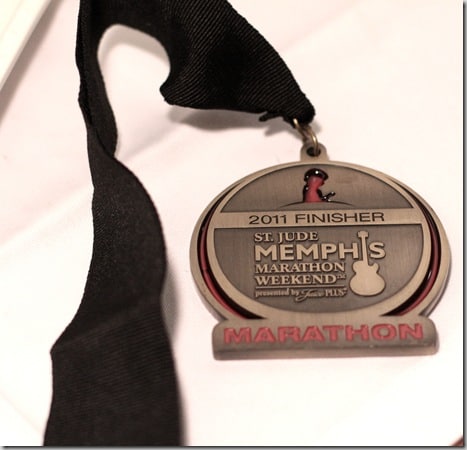 It still hasn’t sunk in. But it better, because I’m doing this again!

Short version: great race, exceptional organization, and I’m probably spoiled for life with the exceptional service from the directors. I finished. And I did it before they closed the course.

Long version:
I couldn’t have asked for a better experience. Even if my training had continued as scheduled and I got a much faster time, the day couldn’t have been any better.

I spent the morning Friday going over my packing list and getting things squared away at home. The trip up there was good. I was nervous. Very. The traffic was terrible, but we were prepared for that. At the expo, I was not prepared for how big it was. I have never been to a big time race expo before. I got to meet Hal Higdon. I didn’t want to tell him that his plan wasn’t going to work for me this time, so I just let him keep talking on the stage

. I saw a ton of discount shoes, but nothing in my size. I almost got a 26.2 sticker for car window, but I passed. What can I say, I’m a realist. I knew I had the mental strength to go that far, but my body doesn’t always keep up. I passed on the sticker, grabbed some free coffee, and found my pacing guide. He was a racewalker. I told him a quick version of my issues and he said "nobody will remember that you met some arbitrary time goal for your first race. All they will remember is that you crossed the line". Bless him. He was a nice guy. Too bad I couldn’t keep up with him.

My mother had told me a few weeks earlier that she was driving up for the race. I tried to warn her that it could take me many MANY hours. She said she wanted to be there in case something happened to me

. Then Dad said he might try to come up and he did. Then, my sister and sweet nephew drove up to the hotel. I about cried. My nephew is just over a year old and it was going to be a LONG day. But she said she wouldn’t miss it and she had my parents to help her. Things were lining up for a good day.

Race morning: I ate a muffin and gatorade. We all got parked and I dropped them off at Autozone park, where I would eventually run in or be carried in. I got to the long line a johns and took my first of many bathroom breaks. Just waiting in line, I went 3 times and all I had was half a bottle of gatorade. I lined up in the VERY BACK since I knew I would be taking this slow and easy. As we kept moving towards the line, I kept hearing "Roll TIDE!!" and I couldn’t figure out what was going on. I knew I didn’t have any Alabama gear on, but I figured a random Kenyan might have one.

I looked up and saw my family (Jackson in stroller included) waving HUGE signs with Alabama logo and my name on them. What was even more funny was a guy wearing LSU clothes was waving one, too. As I passed, mom said "We’ve gotten a lot of friendly feedback on these signs". It made me laugh and shake off some jitters.  It took us 36 minutes to cross the starting line. Another reason I hate finish line pics.

Miles 1-3. Blur. One big blur. The crowd support was unbelievable. Riverside drive was gorgeous. I kept a great pace and felt even better. At mile 3, I saw my family with signs waving.

Miles 4-9  Mile 4 is the run through St. Jude. I can’t even explain what that was like. The kids, parents, signs, more kids…it was overwhelming. It was like a big party. I have no idea who Jake is, but his family had signs over the whole course and thoughts of Jake and KB kept me going. I was still going strong. I used the aid stations to full benefit by getting one cup of water and one cup of powerade. Since I knew I was close to the back and could see they had PLENTY of supplies, I didn’t see a problem taking two cups. Pace is good, one gel down, testing glucose is good, I might keep up with the pacing man the whole way. No bathroom stops. It’s like once I started running, my bladder closed down. Then my hands started really swelling.

Miles 10-13.1 Man..I’m glad they turned the half runners down a little side street before going into Autozone. If we all had to pass, it would have been very tempting to call it a good day and just do the half. I’m assuming the race directors knew that because quite a few of us who had another half to go looked longingly at that side street. I was beginning to get tired and another 13.1 was daunting. Saw my family again. Mom and Stephen had been there a while waving signs to people. They said the faces seemed to perk up and they got a lot of positive feedback from someone waving to them. I told them to keep it up because it does help. It doesn’t matter who the signs and waves are for.

Miles 14-18. It’s just like that marathon video. Second wind baby!!! I didn’t know I had such a thing as a second wind. But maybe it was me just passing into delierium. All of a sudden, things seemed easier. I was breathing fine, pace was good, I was now walking and running on a good schedule and I was having so much fun. Random songs like the "bye bye binkie" song (Thanks, Monica

) rolled through my head. I heard about 6 different versions of Sweet Home Alabama from the support acts. I belly danced at one aid station. I did the Dance Fever with a group of girls with Down’s Syndrome. I high fived a few Elvis’. It was a party. Then I decided I should use a bathroom.

Miles 19-23. Apparently, when I go pee, that’s a open invitation to pee every 10 minutes. I started slowing my pace down and I felt some calf pain. I didn’t want to limp the rest of the way so I ignored it the best I could. I passed one lady who had a whole card table full of stuff like bananas, pretzels, pb, gummies, etc. I grabbed a couple of pb pretzel bites. She said her child was currently in St. jude right now but she wanted to be there until the last runner came by. So that got me through a couple of miles. I passed another sign for Jake, but it was in past tense. "Keep smiling! Jake always did!!". That got to me. I passed a gentleman and I was walking then. He came off his step and asked if he could shake my hand. His son just lost his battle with cancer and he said he knew without St. jude, he wouldn’t have had the time that he did with his son. Well, I lost it then. Just shook his hand, told him it was an honor to meet him, and picked up my pace and cried like a baby.

Miles 23-26. Pee at every mile. Check the garmin. How much farther? Shuffle, walk, run, sing crazy songs, curse the sun, and then before I know it, I look up and see my family on an overpass bridge waving those signs and telling me "you’re two minutes away from your dream!!" I go under the bridge and the 26 mile marker lady said "Up this short hill, down the hill, and you’re there". I wish I had gone slower up and down that hill. I really do. I wish I had taken the time to take it all in. I had taken forever to finish 26, I should have enjoyed the .2 more. I heard my family screaming their head off and people that were still left were on their feet. All I could do was smile and get my medal, space blanket, and picture with the twin Elvis’.

So after a few roadblocks here and there, I did something a few people told me I would never be able to do. And I’m still intact. I have some soreness in one calf/back of knee that might need some extra attention, but everything else is in working order. I had some massive stomach pain/issues/swelling overnight Saturday and all day Sunday. I couldn’t keep anything down and had the worst headache. I made sure I drank plenty of equal amounts of water/powerade, but maybe I should have done something differently. Live and learn and do it better next time. I will do another marathon, maybe next fall. I have LOTS of room for improvement.

One thing I have to say, if anybody is ever in the Memphis area, this is one race I can’t say enough about. They had aid stations at EVERY MILE after mile 3. Actually, after about mile 10 they were placed in the halfway mark between the mile marker signs. So you had something to look forward to EVERY HALF MILE after mile 10. That was really helpful when things started sucking. It’s easy to say "get to the next mile" and "get to aid station" when they were in half mile increments. Also, they had trucks bringing supplies to the stations so the slow people had plenty of water and powerade.  The race started on time and we started moving every 2 minutes in the wave start. Plenty of crowd support with entertainment acts at each mile. The drum line of 4 people was outstanding. I loved the harmonica band. Zumba was a big hit, too. But the best part was the St. Jude walk through mile 4. Nothing can prepare a person for that. And I’m so glad I got to experience it.

I also can’t thank my family enough. Mom and Stephen spent a lot of their day running from place to place trying to meet me and in between, they cheered for anybody else passing by. Dad and Monica kept Jackson out of the wind and more importantly, entertained. It’s not easy to keep a baby, even a good-natured baby like Jackson, occupied and happy for so many hours. This was a total sacrifice of time to come support me and I didn’t realize how much I needed them for this first attempt at the big race.