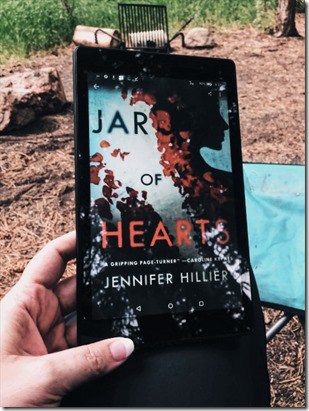 “In every story, there’s a hero and a villain. Sometimes one person can be both.”

In this story of obsession, friendship, and murder, Jennifer Hillier has created a masterpiece that I could not put down.

Angela, Geo, and Kaiser were best friends throughout high school. Angela was the popular one and Geo was happy to let her shine. Kaiser was the boy who completed their friendship. When Geo caught the eye of Calvin James, Angela wasn’t thrilled. And then Angela was murdered. What began as a strong friendship of 3 people quickly fell apart for years.

14 years later, her remains are found and lives are changed. Kaiser is now a Detective and the one investigating is old friend’s murder. His investigation leads right to Geo and Calvin James, the one who broke the friendship years ago. As lies are brought to light and truths are laid bare, we are led on a twisty journey of obsession.

Told in past and present time and through Geo’s point of view, we find out what really happened and why. We find out early in the book that Geo is going to serve some time due to a plea deal so we know she played a part in Angela’s death. The real questions are WHY??  It is a story that is beyond the standard murder plots we often read. Just when I thought I had this figured out, when I thought I knew the thought process and motivations, I found another curve and twist.

This one grabbed my attention from the first page and I will definitely keep Jennifer Hillier on my reading list. Thank you to Minotaur books for the ARC for my honest opinion.