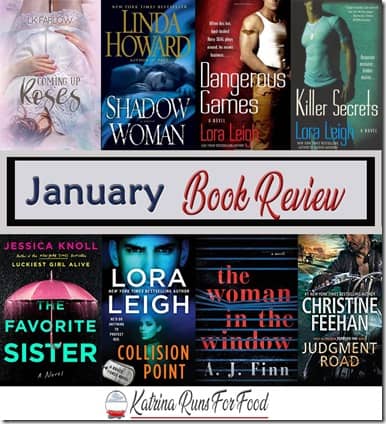 One of my main intentions for 2018 was to read more and not just read more but report more. I had said in an earlier post that I often get in slumps when all I do is reread older favorites and I wanted to expand my reading and actually post reviews. I took a couple of steps towards that goal in January. 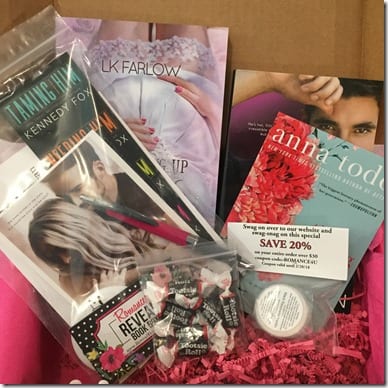 The Favorite Sister– This was an ARC from the publisher. It is due to be released May 15th. This is the same author who wrote The Luckiest Girl. I loved this book! The plot is centered around 5 women cast for a reality TV show similar to The Bachelorette-type shows. This is where I admit that I have not watched any of those shows. But I’m an avid fan of UnReal, the show that reveals what happens behind-the-scenes of reality TV. In this book, 5 women, including sisters Brett and Kelly, are cast for a reality TV show Goal Diggers. The season ends with one of the 5 being murdered and you have to read to the last page to figure out the Who and The Why. The dynamics between the characters were a fascinating read.

Collision Point– This was another ARC that is set to be released Feb. 27th and one written by a favorite author. This is the first of the Brute Force series. Lora Leigh wrote the Elite Ops series and the Navy SEALs series. I have read books from both series and although the characters can mix between the two series, Collision Point is a stand-alone book that begins a spin off series. If you are a fan of Lora Leigh, you will love this new series. If you have never read her work, I encourage you to start with the Elite Ops series to see if you like her writing and plot development.

Rory is the bodyguard/boyfriend of Amara, the daughter of the Russian Resnova family. After being rescued from a kidnapping, she loses the memories of the previous year of her life but she has fleeting dreams of Rory. She tracks him down and they spend the rest of the book trying to figure out who they can trust and what happened before and after Amara’s abduction.

The Woman in the Window– Buckle up, buttercups. This one is a roller coaster. This is textbook Hitchcock-ish. There is mental illness (agoraphobia), angst (family issues), outrageous speculations, nosy neighbors, and maybe murder. Maybe dreams. Maybe psychosis. Maybe just drunk and active imagination. At times,  I found myself yelling and name-calling at a book. It was delicious. It’s the way books are supposed to be, and I want more.

Judgement Road-Christine Feehan has branched out into the MC genre, and yes, it’s now a full-fledged genre thanks to Sons of Anarchy fans (like myself). If reading about motorcycle clubs (they’re not GANGS, they’re CLUBS) is not your thing,  then skip on down to the next book.

The story itself is fantastic. A nice girl from a rival (she doesn’t know it’s a rival) club wanders into Torpedo Ink for a bartender job. She’s good at bartending and that’s all she is interested in doing—working. She has no real goal of being a club girl or anybody’s old lady. Predictably, there is a club guy who doesn’t want her around but then realizes he does even with his very dark history that might turn off some readers. When you mix this dark soul mix with rival club business activities , then you’re off to the races with Feehan-ian trademarks. By that, I mean she has some hard-core issues in this book. It’s dark at times so reader beware.

Coming Up Roses– This was one of the book in the Reveal book crate this month. I so enjoyed this light and easy book between the book hangovers of Feehan and Leigh. Myla and Cash are adorable. It is set in the south, so of course I loved it. Myla’s pregnant but loser baby daddy runs out on her so she’s alone but optimistic for her and her child’s future. Then she almost maims Cash in the Piggly Wiggly and then it all falls together. He’s not looking for any commitments, but she’s so darn charming and he can’t help wanting more for himself and for her. Cute story, believable characters, and truly dastardly actions from baby daddy make for a great book on a rainy afternoon.

Shadow Woman– I was hoping for more from this one. I have been a fan of Linda Howard for years. She lives in Alabama and has a few books set in Alabama and she can write romantic suspense like no other. . . back in the day. I have no idea what happened. She was on a roll with back-to-back excellent bestsellers and then she began putting out books that just felt completely different from classic Linda Howard. This one is about Lizzie who wakes up one morning and realizes the face in the mirror is not hers. She begins having flashbacks/memories and the story takes off with her running from everybody. Xavier was her boyfriend and has been her protector for the past 3 years as he watched her and waited for the memories to return. Once they returned, she was now a target for people who wanted her to stay oblivious. It almost suspended reality and I’m fine with that, but I needed more plausible details and more what happened prior to these events. Lizzie and Xavier didn’t get on the same page until almost 75% of the way in. I do love a good slow-burn story but this had too much stuff going on to pull it off.

What’s coming up in February? I’m not sure. I may settle in for a long series or I may flip around some and see what’s up. Either way, I’ll be back later in February with more book reviews.