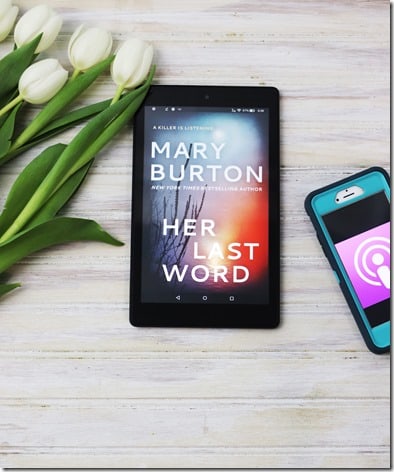 Fourteen years ago, Kaitlin Roe was the lone witness to the abduction of her cousin Gina. She still remembers that lonely Virginia road. She can still see the masked stranger and hear Gina’s screams. And she still suffers the guilt of running away in fear and resents being interrogated as a suspect in the immediate aftermath. Now Kaitlin has only one way to assuage the pain and nightmares—by interviewing everyone associated with the unsolved crime for a podcast that could finally bring closure to a case gone cold.

But when a woman Kaitlin questions is later found stabbed to death, she fears that she’s drawn a killer out of hiding. It’s Detective John Adler’s fear that the murders have only just begun. Now his job is to keep Kaitlin safe.

Mary Burton kept me guessing in this one. Just when I  thought I had the ending figured out, she brought out a wild card. Kaitlin was magnetic and fierce in her search for the truth. Ready to face her own past, she unknowingly puts herself in danger while trying to solve the current murder and the cold case of Gina. I liked how the the slow burn romance with Adler enhanced the story instead of throwing in a misplaced distraction as is the case with many “romantic mysteries”.

This is both a police procedural and psychological thriller with dual timelines. The chapters and interview files switch back and forth between present and past. I read this one without any breaks and I could easily keep up with the timelines.

Previous
The Week that Never Ends
Next
Book Subscriptions Worth Buying
Click here to cancel reply.