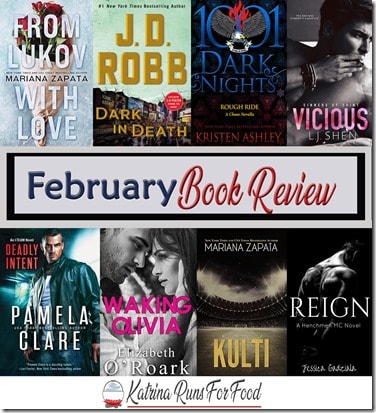 I have to say, this graphic is a thing of glorious beauty.

Up until this month, I had 3 ride-or-die instant buy or click authors. JD Robb is an instant buy from a bookstore. Kristen Ashley is an instant click or pre-order. And Mariana Zapata is USUALLY and instant buy, but I haven’t always bought her books immediately.

Take a look at these new releases on just the top row. All 3 holy grail authors, 3 new releases. Let’s just say I had my nose in a book or kindle for most of February. In fact, since I was sick with multiple rounds of flu, strep, and sinus infections, blogging just didn’t happen. Sleeping and reading was the norm for the warmest and greyest February in Alabama. I read 31 books in February. Do the math and some days, I read more than 1 book/day. A couple of books, I reread to soak in every little detail again. It was fantastic month in bookland.

Another great thing happened in February. I found some new authors to add to my must-read list. I’ll get to those soon. First, the reviews! I often find myself in genres and stick around for a while until I’m ready to move on to another. February was the month of sports fiction (Olympics time!!) and motorcycle stories (anytime!!). It’s quite a leap, but it worked for me

1. I have to start with JD Robb Dark in Death.  I have to say up front, that there are only 3 books in this entire 40+ series that I did not like and do not re-read each summer in prep for the September release. That means I’m a serious fan and I honestly do not know how I will deal with the end of this series. It has been part of my reading life for 15 years.

So, this book specifically has everything classic Robb (Nora Roberts pen name for this series). We have Eve Dallas working on a murder case. This time, the unsub  is stealing the scenes from a book. The action is typical for Dallas and her supporting cast of memorable characters. I always want to hear about the Miras, Peabody, and even Summerset who seems to be growing on Eve. It’s only taken 40 books to be in the same room with him, but the actual time across the series is a few short years. If you have never read a JD Robb, you have to start at the beginning. This is not a standalone and you will be completely lost and miss out on the back stories that are important as the actual storyline for this case.

2. Next up is Kristen Ashley. She went and did something I’m not real thrilled about. She wrote a NOVELLA….about Chaos motorcycle club. Rough Ride is part of the 1001 Dark Knights group. This short ass, not enough words, just enough to make me mad, novella was Rosalie and Snapper’s story. Rosalie had a brief encounter in Shy and Tab’s book and I wasn’t really missing her story. I mean, I was good with her moving along from Shy even when he did her WRONG. In this …novella…ugh, even the name makes me cringe, we find out that Chaos business blew back on Rosalie and in a horrifying way.  The rest of the book is focused on the dynamic between Snapper and Rosalie and by the end, I had forgotten my tiff with K. Ashley. Sure, I could have used an actual NOVEL, but I know that the characters write the stories in her head. They must have left her alone after a little while. Dangit.

3. February is the time of the winter Olympics, and Mariana Zapata came through BIG TIME. From Lukov With Love OWNED me. I reread it 3 times, start to finish. I do NOT count rereads in my total for this month, btw. But this book is without a doubt the best one of Zapata’s books. It surpassed Kulti, which I read before Lukov. I saved Lukov for the first couple of days of the Olympics. It was AWESOME! Ivan is a fancy pants figure skater who has won bunches of stuff and Jasmine is scraping the bottom of the competition barrel. She’s had a bad run with a bad partner and she’s yet to bring home the bling. Then Ivan, who seems to hate the air she breathes, offers her a one-year chance to be his partner and maybe get a leg up on competing in pairs again. What follows next is a tale of tremendous strength. Not just the in-your-face-feel-the-ice details of practices, but the struggles with herself and her place in her large family. Ivan is amazing. He’s got the tough-love persona but he’s got what it takes to deal with Jasmine and her walls. Loved every bit of this book.

4. Kulti is another sports book by Mariana Zapata. This one is about professional women’s soccer. Kulti is the famous soccer player who graced the walls of certain young female hoping to be a great soccer player when she grows up. After he retired from the professional circuit and disappeared from public eye, he shows up at practice one day for the Women’s pro league and that young girl is now a 27 year old badass kicker and player. But Kulti has fallen off that pedastal and spends a good portion of the first half of the book being a grade-A jerk. Mariana Zapata is the QUEEN of the slow burn romance. Many authors try to do this type of writing and fall short. Zapata keeps the reader glued to the action and dialogue on the build and when Kulti and Sal finally get their ducks in a row, readers (like me) actually cheer out loud in the middle of the doctor’s office. Or..wherever.

5. Moving along to the next sports book, Waking Olivia moved me and stayed with me and I haven’t been able to get her off my mind. This is a new adult (college age+) book about college track and that’s just scratching the surface. We meet Oliva when she’s called to the coach’s office to meet her new coach who already has bad opinions about her due to her getting kicked out of her previous school and losing her scholarship. I won’t spoil it, but Olivia has serious demons and running is her escape. I was probably 30% through the book when her issues were revealed and  I had to put it down and wait a while to continue. It was hitting way too close to home. It’s no secret that I started running 12 years ago for the simple reason that I was having awful nightmares and I learned that running in a public park at 3 in the morning helped me cope. Running has been my therapy ever since that long February in 2005. The rest of the book is learning how Will helps her and how they come together to help Olivia solve a family mystery but doing so with her soul in tact. This isn’t a light fluffy read. It’s deep and emotional and heart-wrenching. Elizabeth O’Roark writes in such a way that you feel. That’s it, you just FEEL IT ALL.

6. Deadly Intent. Reading Pamela Clare is like finding the best seat in the house. The one with the comfy blanket, awesome coffee, and a view of the beach or mountains. She’s just perfection.
I have read and enjoyed the I-Team series for years and could not wait for Joaquin’s story. He’s been a supporting character for a while and he needed his chance for a story and to find his girl.. Pamela knocked it out of the park. This book is a great mix of action, romance, and enough conversation to allow the reader to invest in characters.
Let me start with Mia. She was so well-developed. In this book, Mia is playing the role that was filled by men in previous boosk. She’s the military woman. I feel like I need to invite her to the second best seat in the house and have a good long chat about her last few days. She wasn’t too whiny or too badass. She paid attention to her gut instinct and refused to let anyone brush aside her instincts. At one point, she had to not only face some demons, but she had to share them with people she wasn’t sure she could trust.. She had to dig deep for that courage and I was cheering her on the whole time. I need more Mias in my life.
Now for Joaquin. Oh bless him. He suffered greatly in the previous book and his can’t put aside his protective feelings for someone who might be in trouble. He’s been the behind-the-scenes guy. The wing man. The man behind the camera. But never fear, he’s a total alpha male who clues in to Mia’s sense of being in danger and he reacts beautifully. He’s not too OTT alpha, but enough to allow Mia to feel like she’s not alone in dealing with threats to her life.
Love love love this latest installment of the I-Team series.

7. New authors to love!! L.J. Shen. Vicious, first in the Sinners of Saint series. Holy moly, this lady had me buried in books for days. She takes the broken and wounded and wraps them up in cactus plants then sets them on fire. The roller coasters her characters have to ride are brutal and that makes their HEA unlike anything I could come up with. I couldn’t look away. Thanks to Kindle Unlimited, I got the try the first book in this series and then I just bought the entire thing to have forever and ever. In this book, Emilia and Vicious  meet during her senior year of high school. She’s the daughter of the help and he’s the rich son of parents who are literally never home. He basically treated her like dirt and she left home to find a place in the world for her. They collide…and that’s best word to describe it, a collision of wills and verbal daggers…years later and they just can’t let each other go. Vicious is just that. Vicious. Em is the selfless bundle of sweetness that puts everyone ahead of herself. Except Vicious. She keeps him for herself and doesn’t let go. This is a slow-burn and seriously high on angst story that I couldn’t put down until I finished it. And then started the next book. L.J. Shen is now a holy grail author.

8. My next new author to love!! Jessica Gadziala carried my motorcycle club train into March. I started with Reign, first in the Henchmen series. She writes this Henchmen MC group as major alpha men who have a serious code with protecting their women, or any woman, actually. Each book has a hero/heroine with deep issues and/or loads of past baggage. There is no cheating between the hero/heroine and in fact, some are almost too much love-at-first-sight, in a rugged monosyllable grunting growling biker sort of way.

Wow. That took a while. I’m fiddling with the idea of maybe posting individual book reviews, especially for new authors and Advanced Reader Copies, on separate pages in my Book category. I really could talk a lot about my books, as you can see. Then, for the recap each month, make a summary with links. Most of these books and series could have been a separate page and deserved their own space. February was such a good reading month.