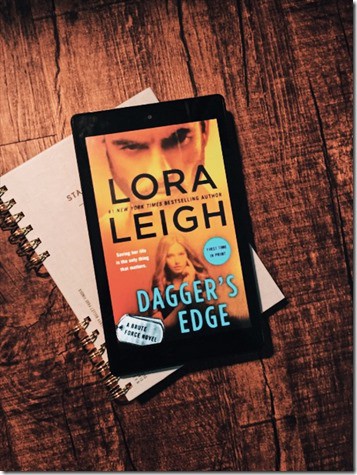 Dagger’s Edge is  the second book in the Brute Force series by Lora Leigh. The first one is Collision Point and I highly recommend reading that one first.

Ivan Resnova is a former mob boss and one bad dude. He’s tired of his brutal ways and is ready to make some changes in his life and those changes begin with Syn. However, leaving behind a life of crime does not erase the connections and he knows he will spend the rest of his life looking over his shoulder. But if he allows himself to pursue Syn, will her life now be in danger, too?

Crimsyn Delaney has had a horrendous life. Her father and grandfather are some of the scummiest of scum on the earth and she has spent her adult life trying to get away from them. Years ago, she saw Ivan and never forgot him or her feelings for him. She is a close friend of his daughter and she assumes that is all she’ll ever be to Ivan—a friend of his daughter. Now that she has her own family trying to find her, she needs Ivan’s protection more than ever. But can she protect her heart while trying to save her life?

First, the introduction was difficult to understand and I had read Collision Point a few months earlier. This intro is a flashback to four years ago. I feel like this needs to be explicitly explained for any new readers. Something like “Four years ago and will be important later. Stick with me on this..”  I did stick with the intro and it all became clear, but I’m very patient with books from beloved authors. I knew this story would be good so I hung in for a few pages.

Second, I don’t have any issues with much older man with a younger woman as long as both have reached age of consent. Syn was young in years, but let’s be honest. Her family made her grow up far too soon so her age number really means nothing. Ivan, being a former criminal, is used to getting his way and he wants Syn but he’s got to dig through some serious baggage that would make Delta Airlines cringe.

Even though Syn isn’t sure about happily-ever-after with Ivan, she has zero problems hitting up the sheets with him. She started falling for him four years ago and never thought he would ever see her as more than his daughter’s friend (this may be where some people have issues with Ivan and Syn). When she realizes that he not only remembers her but also has feelings for her, their chemistry was off the charts.

Last, Syn’s family are total whackadoos. I wanted to see her scrape them off like gum on July asphalt and waltz into the sunset with Ivan. Read the book to see what happens!  This was a suspenseful read with heavy romance with some unforgettable characters. Thank you to NetGalley for the book for my honest opinion.