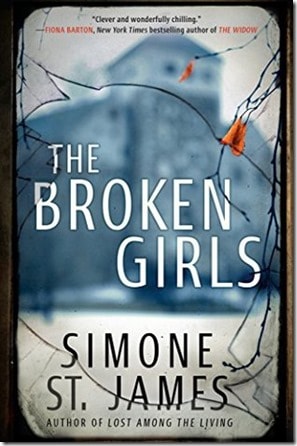 Buckle up, Buttercups. This one is going to set your hair on fire. By that,  I mean at one point, I was gripping the book and yelling at a side character like he was sitting right here at the mercy of my wrath.

Not many books make me act a fool, but this one did. Broken Girls by Simone St. James

In Vermont 2014, Fiona is a reporter and she stumbles into an investigation into an abandoned boarding school Idelwild Hall from the 50’s. This is a school for the unwanted girls, for various reasons. Katie, CeCe, Sonia, and Roberta are close friends and their stories are heartbreaking.

It just so happens that Fiona’s sister was found murdered on the grounds of Idelwild Hall and now someone wants to restore the buildings and open it back up. Throw in dual POV between the girls who lived there and the current events circling Fiona and her own personal struggles and this book was so hard to put down. The questions just kept building and I was desperate to find the answers.

The alternating time lines were easy to follow and the lead up to the ending was not rushed for the sake of finishing a deadline. There was some side angst with Fiona and her boyfriend and with Fiona and her father. They all three deal with some unresolved issues.  I loved how the author kept us guessing about her boyfriend.  A few times, I wanted to sit Fiona down and ask her what she thinking, stomping around dark creepy fields at night and I desperately wanted to go clean her father’s house.

There is a paranormal element but it is cleverly written. I’ve read my fair share of Ghosts Gone Wrong and Simone St. James did all the right things to bring Mary Hand to life. Literally. It doesn’t matter if you believe in supernatural beings because Mary Hand is a very important character and crucial to the story.

This book drew me in and kept me tangled until it was finished.

Previous
Workout Wednesday-Couch to Fierce Beast
Next
Love is in the small parts.
Click here to cancel reply.